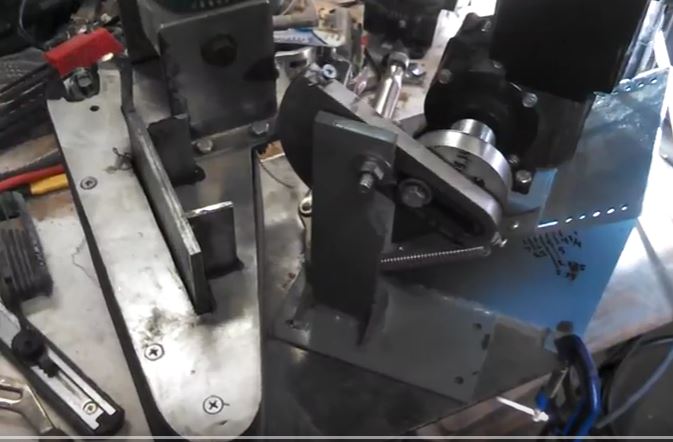 After having refinished more than my share of staircases the old fashioned way–scraping the old finish or paint off by hand and sanding it with whatever sander I could fit in the confined vertical space of the riser, I was determined to come up with a more efficient method.   I spent quite a bit of time devising a belt sander that could fit into the riser space and had a mechanism that raises and lowers that belt sander.  The mechanism had to be adjustable for what the maximum height is, but the minimum height is always the same, that is, the sander always gets lowered to the tread that it is sitting on, but you can adjust the amount of travel so that it can sand a 4″ riser or a 7″ riser–make sense?

The actual mechanism is a sort of Scotch yoke I think.  The part that does the actual lifting is a sector, so that the lifting force is always straight up.  The motor shaft has an arbor with multiple tapped holes, and you set the lifting height by what threaded hole you put the bolt in, and you have to adjust the position of the motor itself on its angled stand correspondingly.

The mechanism worked great, exactly like I wanted it to, it was capable of lifting at least 20 pounds on a wire with no difficulty, so you were never going to stall it out.  The only problem is it weighs about 50 pounds, WAY TOO HEAVY, and too big and the user would be too far away from the work.  I thought maybe if you put the whole thing on a sled that scooted left and right on the tread, so as to minimize the friction, but. . . I think that was too impractical.   So, after all that work, I have scrapped the idea having the motor raise and lower the belt sander for you, and am working on a spring loaded device, where the belt sander is sort of dangling by a heavy spring and you have to hold on to it and steer it up/down/left/right.  Sort of like a reverse jack in the box.

Now the belt sander portion, the main requirements were: 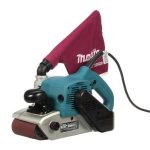 1) there could be no obstructions on the top and bottom for the first 1.5″ of depth, so that could fit right up underneath the tread nosing.   All handheld belt sanders have the drive section on one side of the machine, so that you can’t sand up close to something on that side.  (see the big black plastic cover on that Makita sander)

So I came up with a three wheel design where the driving wheel is set all the way to the back, and the front two wheels are just idlers.  Also, the belt tracking adjustment had to be flush with the top of the sander too.  The motor is a makita 7″ disc sander, which seems to have enough grunt to do the job, but I have yet to really test its limits.

2) you can use standard 29 7/8″ x 8″ floor sanding belts on the machine, since floor guys have piles a of them already, and they wouldn’t have to buy new belts.  You just have to slice it down the middle to make a 4″ wide belt and you are ready to go.

3) good dust collection.  Scraping and using a random orbital sander is a pretty clean process, but one time I used a 3×21 belt sander to do most of the sanding on some pretty rough risers, it made a hell of a mess–lucky for me the house was not occupied.