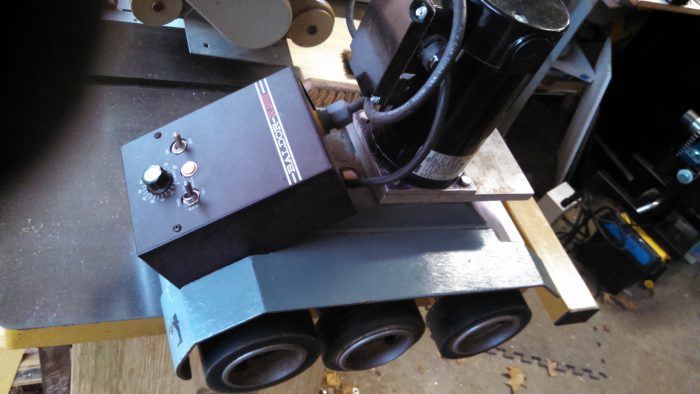 Having a need for a super slow variable speed power feeder, the options are a 3 phase 220v unit with a VFD to control the speed, or a DC unit.  Most fixed speed geared power feeders go down to about 6.5fpm, the new DC servo one goes down to 5fpm, but I wanted something even slower, because my 3hp shaper can’t profile flooring or any other full depth profile with anything higher than about 3fpm, and I do not want to run multiple depths of cut.

all a DC motor on it.  If I had known what was going to be involved with getting it up and running I would have just done something else.  Having never disassembled a power feeder, I found out that the power is transferred from the motor to a worm and wheel gear set, then to a sprocket and gears to drive each wheel.  It did not come with the worm gear that goes on the motor shaft, and there is no information on the internet about the dimensions of that part, apparently it is just a machined on the motor shaft as far as I can tell, so it is not a separate part. 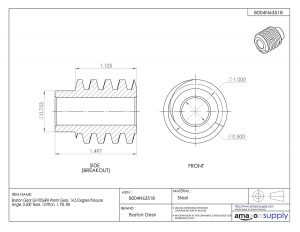 I also could not get access to the worm wheel to get dimensions either, it is part of an assemblage that is pressed into the body of the feeder, and I could not devise a non-destructive method of getting it out.  So, I had the bright idea of using a piece of silly putty to press into the worm wheel to get the profile of the worm gear that I needed to acquire/manufacture.  After measuring up the silly putty mold as best as I could and taking the interior dimensions of the gear box to find out approximately how big of a part could fit in there.  After consulting the interwebs and the machinery’s handbook, the best fit was a 14.5 pressure angle worm gear, 12 pitch, 1″ pitch diameter, right handed, and I needed a .500″ bore, with set screws.  But I also needed it to reach about 3″ down into the gear case, and none of the manufactured worm gears were nearly long enough to reach that far and engage the worm wheel.  So I had to make my own part. 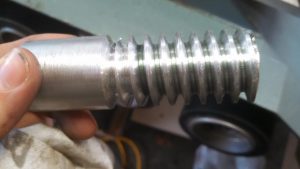 I ground a forming tool for the lathe that matched the silly putty mold and the schematic above, and cut the worm on the lathe.  4tpi is the lowest that my South Bend 10K will thread, and this just happened to be 4tpi.  I think I used a 3″ long section of aluminum, 1.5″ OD, brought it down to 1.25″ OD, bored it to .5″, threaded it, and drilled and tapped for a couple set screws.  I know these parts are usually made out of hardened steel, but this was just a prototype, so aluminum was a good choice for rapid prototyping.  Turned out great.

Getting it installed and setting the proper mesh on the gears was a little tricky, as I could not see inside of the gear case to tell what was going on.  I even tried snaking a bore-scope in through the oil port to help, but I couldn’t see anything, and I ended up judging proper mesh by watching the current draw on the motor, and listening to the noises as it ran.  When the gears were slightly out of mesh, it would have a swing in current draw accompanied by a regular groan then quiet then groan.  And just adjusted the motor on its mounting holes to minimize both of those.

I forgot to mention I also had to make a couple adapter mounting plates.  The original motor mounted with 4 bolts, but my motor was too big in diameter to use those so I had to use one plate to mount to the body of the feeder to use the original mounting holes, and drill and tap that for an adapter plate that would bolt to my motor–it was a real ordeal.  I have a feeder stand, but I still need to make an adapter arm to be able to attach this feeder to it. 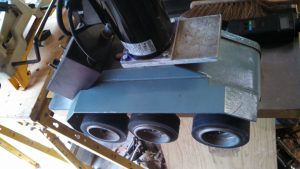 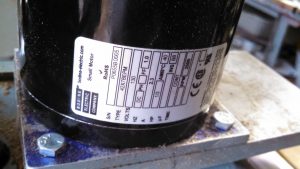 FYI I used a KBMD DC drive and bodine 42 series 1/3hp DC motor, it has a range of 0-17.5 with the current gearing.  But I set the minimum speed to 2fpm because it was too easy to stall it out below 2fpm.  But at or above 2fpm it seems to have plenty of power, as I can’t stop the wheels by hand by grabbing and holding them.  All things considered, I was rather surprised that it actually worked.