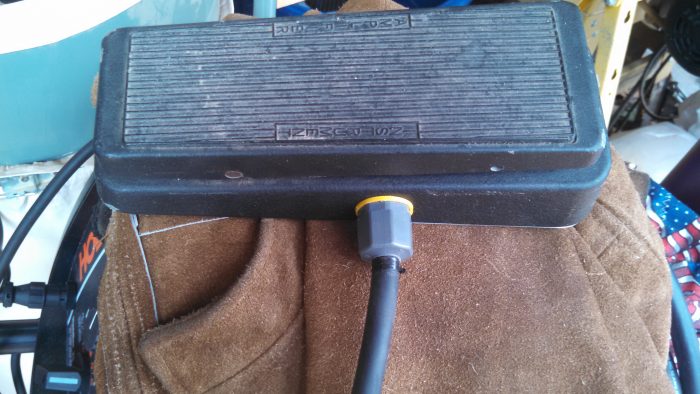 I used to entertain the idea that I could play the guitar.  I have since abandoned that notion, but I still have all the gear.  I had a wah-wah effect pedal laying around and I thought I could use that to control the variable speed on a DC motor.  The commercially made variable speed pedals (Linemaster varior) are kinda expensive, about $160-ish new, and you can sometimes find them on ebay for $80-100.  I have bought 3 of them, and they are good units.  But you can get a used crybaby wah-wah for about $20-30.   For the KB electronics brand of DC controls that I use (KBPC, KBMD, KBWM) they require a 5k ohm potentiometer, with a 2 watt rating, and the wah-wah uses a 100k ohm potentiometer, so you will have to buy that also.  But you just swap those pots, and rewire the on/off switch if you want to use that, and you are good to go.

A clarostat linear taper 5k pot costs around $10-15 on ebay.  You need to get one with a long stem.   If the stem doesn’t have a D profile, you are going to have to mill/file a flat on it, because the plastic gear on the wah pedal has a D shaped bore.  Also, you want a pot with 3/4 turn range, not full turn range.  The wah pedal only travels 3/4 turn, but my pot is full turn, so I had to decide whether I wanted to lose range off the high or the low end, I chose the high end, because this was for a welding positioner that doesn’t need high speed.

I took all the guts out of the pedal to make room for the wiring.  I had to open up one of the jack holes with a unibit to allow a strain-relief to be installed.

With the linemaster foot pedals, they are spring loaded, so you have to keep a foot on them with constant pressure to stay at the same speed, but with this you don’t have to keep your foot on the pedal–you should just in case–but you don’t have to use any mental resources making sure you maintaining the right speed.  I wired mine up to use the on/off switch that comes with the wah pedal, so you click it on, then it starts on slowest speed with the pedal all the way depressed, and you angle the pedal up to increase speed, (the opposite of the varior pedal).  Getting ahold of 6 wire machine cord is a little difficult, and it is kind of expensive, after buying it online, I found out that they do carry it at Lowe’s they sell it by the foot off of the spool. 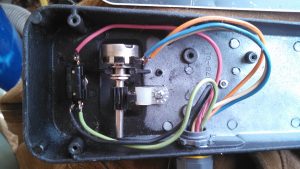