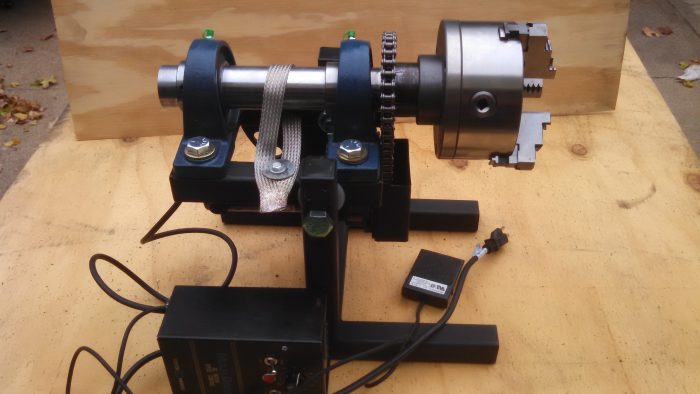 All of a sudden I wanted a welding positioner.  It has never come up that I needed to rotate a part and weld on it at the same time, but I started working on a design for such a device anyway, then someone posted one on craigslist.  They had had a bunch of parts made up to manufacture and sell a batch of welding positioners on ebay, but had since lost interest–so I took over the project.  They were being built from a set of plans someone is selling on ebay as well–but I decided to wing it instead.  The original design was a free-standing unit, that is driven by a stepper motor and an arduino–essentially a one-axis CNC machine.  I wanted to use a DC gear motor and DC control to better facilitate the use of a foot pedal,  and scale it down to a benchtop model so I would be able to ship them easier.

Can handle at least 300lbs vertically no problem, horizontally I bolted 160lbs balanced load to it and it handled that fine.

I have built some with a KBMD or KBWM with variable speed on the control box and just an on/off foot switch (Linemaster t-91-s).   The foot switch you just have to switch from normally open to normally closed, and wire it up to the “Inhibit” inputs on the control.   The “inhibit” function works such that if I1 and I2 are disconnected, the control runs, but if they are connected the control stops.

Some I built with a KBPC and variable speed foot pedal (or modified wah-wah pedal).  The wiring is much more complex, if you want to be able to use the speed control on the box as well as on the foot pedal, you need a on/off/on 3PDT toggle switch to select which potentiometer to use.  That toggle switch has 9 wires coming out of it–3 to the foot pedal pot, 3 to the panel pot, and 3 to the control board.

Then if you want forward/reverse you need the KB #9339

(The foot pedal is controlling the on/off even when you are using the panel potentiometer)  You need a 6 wire cable to run the foot pedal.

For some reason the wah pedal on/off switch would not work with the “Run/stop” inputs, so I had to use the line switch inputs L1A and L1B instead.

Also, the KBPC control is really meant for bigger motors than 1/17hp, so to run that small of a motor you have to cut out the built-in horsepower resister and replace it with a 1/4hp resistor, then the motor amp jumper is reduced to a tenth of its labeled amps.

The inside of the control is getting pretty crowded at this point–and it is a challenge to be able to close the lid. 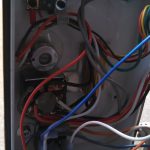 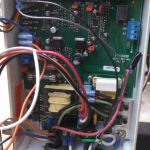 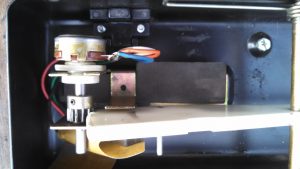 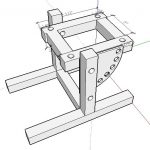 The frame is pretty straightforward.  The only tricky thing is getting the all hitch pin holes lined up properly.

The spindle bodies are just 2″ pipe,

with a separate machined and threaded nose portion.  But the body of the spindle measured 2.003″ OD, and the pillow block bearings were 1.999″ ID, so after much dicking around trying to heat the bearings in oil, and freezing the spindle, and attempting to press it with the hydraulic press–I had to resort to machining .004″ off the spindles to be able to get them on the bearings without destroying anything.  Had to acquire a 2″ bullnose live center for this purpose.

The 30 tooth gear I heated up and pressed on the unmachined portion of the spindle, for a permanent attachment.

The motor mounting plate I ended up CNC machining, because it had to have slots, and holes, and a big center hole all accurately dimensioned and located.

I whipped up a chain guard sort of after the fact.

The grounding is through a strap or two of 7/8″ flat braided copper looped around the spindle,pulled tight, and bolted to the frame.

After attempting to weld freehand I found that it was near impossible to stay in the same spot while the part rotated, the start and finish of the weld wouldn’t meet up at the same point.  So I decided to make a horizontal bracket to either rest your arm on while welding, or to clamp the torch to.

Works great.  My little 140amp Hobart did not have the power to do adequate welds with it though, so I had to upgrade to a 210amp machine, and that is much improvement.

After having built 5 of the square tube frame bodies, I think there is a lot of room for improvement in the design.  Nearly all the professional benchtop positioners are built with 1/4″ plate bent and machined, and if you have the means to bend 1/4″ plate that would be a better option.  Because there is an excessive amount of welding with the square tube, and getting everything flat, square, and accurately positioned so that all your holes line up is not easy.  Whereas with the plate, there would be very little welding and the layout would be simpler. 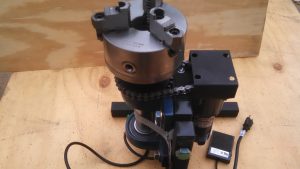 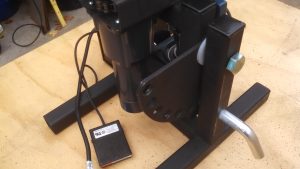 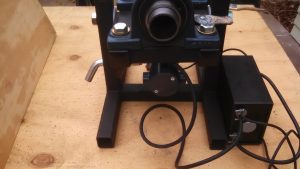 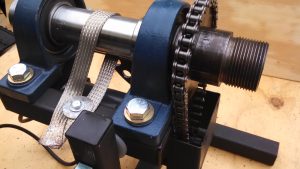 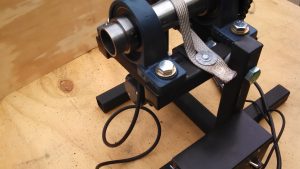 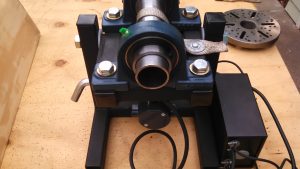 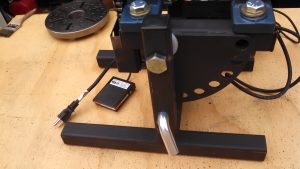